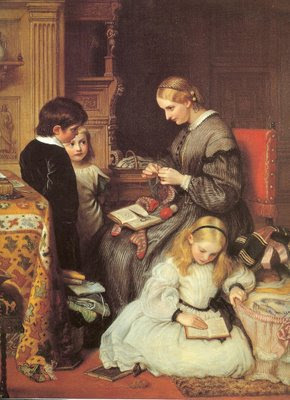 Though I've been a mother since my first baby was born in 1993, I began my actual journey to becoming a more feminine woman about the time I had my 4th baby. I came upon a book at a thrift store (my favorite place to shop!) that made me take a good, long look at my feelings and beliefs about being a full-time mother/homemaker. At the time, my eldest child was 5, I had two boys ages 3 and 2, and just had a new baby girl.

In a word, I was overwhelmed.

I became determined to succeed in this career known as motherhood, and I voraciously read every book I could find on the subject. They included "A Joyful Mother of Children" and "I Didn't Plan to be a Witch" (both written by Linda Eyre), "Raising a Family to the Lord", "Sunshine for the LDS Mother's Soul," etc. And that brings me to the book I mentioned in the first paragraph, "Woman's Divine Destiny" by Mildred Chandler Austin. It was Mrs. Austin's master's thesis at BYU, published by Deseret Book in 1978 and is only 71 pages long, but it caused me to examine myself in a way I had never done before.

The year it was written, 1978, was one of upheaval and confusion for the traditional homemaker. That year could arguably be called the height of the "feminist movement." Women were leaving their home in droves, transporting their children to the babysitter or day care. Convenience foods like "Hamburger Helper" quickly became a staple in the new "Standard American Diet." Women who chose to stay at home and make an art of motherhood and homemaking were ridiculed or pitied as "unenlightened."

I was very young at the time, and luckily, my mother was one who decided to stay at home with my siblings and I. But, even for those who chose to be at home, the attitude toward homemaking was changed in society. Mothers who once found pride and satisfaction in preparing a lovely table and a delicious meal for their husband and children, now created their own brand of "fulfillment" in doing crafts, volunteering, hobbies, and other extraneous activities. They may have physically been at home, but sometimes their hearts were not in the duties of cooking, cleaning, and mothering. The derogatory phrase used for the job of stay-at-home mothers-- "dirty diapers and dishes"-- permeated homes everywhere.

These attitudes and catch-phrases of motherhood continued to grow and became ingrained in the girls and women of the next generation. As a young mother, I found myself

Posted by Rachel Keppner at 1:59 PM