PART ONE: A History on Modern Homemaking


Have you ever thought about how women of the past organized their homemaking efforts? I sure have! And it's sad to me how little there is recorded on the subject. But we do have some clues we can find-- classic literature is a really big one for me. Books like the "Little House" series, some of Louisa May Alcott's books, and my favorite, "Laddie" by Jean Stratton Porter.


In fact this excerpt from "Laddie" (originally published in 1917) inspired me in teaching my daughters how to become proficient homemakers:


"Before any daughter has left our home for one of her own, she has been taught all I know of cleanliness about a house, cookery, sewing, tending the sick, bathing and dressing the new born. She has to bake bread, pie, cake, and cook any meat or vegetable we have. She has had her bolt of muslin to make as she chose for her bedding, and linen for her underclothing. The quilts she pieced and the blankets she wove have been hers. All of them have been as well provided for as we could afford. They can knit, darn, patch, tuck, hem, and embroider, set a hen and plant a garden. I go on a vacation and leave each of them to keep house for her father a month, before she enters a home of her own. They are strong, healthy girls; I hope all of them are making a good showing at being useful women, and I know they are happy, so far at least."

Wow! How many of us even know what those skills are, much less how to do them?!

Modern feminists tend to look down on the work women have done in the home for ages. Yet, look at how skilled, hard-working, and efficient the women of the past used to be! Today's homemaker relies on technology and businesses to do the work that our foremothers did all on their own. We should respect and honor them for all they knew and did-- not look down on their efforts as "menial" or "unimportant".


I truly believe that if we look at the women who came before us, and think about what we can learn from them, we can be more efficient in our own homemaking efforts in THIS day and age. It can be argued that we are busier than women of the past, but I contend that we're busier outside of the home, than they were. Without modern conveniences and ready-made clothes and food, they had to work hard all day just to eat! So, they really didn't have the luxuries and time we do today to spend on hobbies, socializing, shopping, running kids around, etc..
Now, I am not putting down the way we do things today, nor am I saying that we should "pull the plug" on technology, conveniences, or avoid shopping and outside activities. I am only trying to put things in to perspective for myself and other women. While I am grateful for all the opportunities we have in the world today, I do reflect on all the knowledge and skills we, as women, have lost. The most important of which, is the value we place on serving our families in our homes every day.
How did it all happen? I mean, besides all the inventions and changes in our economy, how did the lack of respect for traditional homemaking come about? Here's my take on how things happened in recent history:

First off, there was war. The men were needed in combat, and women were needed in factories to help in the war effort. I do NOT blame them, however. This was needed and necessary, at the time. I honor those women who left their homes and their babies to help out in a great cause. But there were still consequences as a result. Because the homemakers no longer had time to work all day in order to put food on the table, meal preparation had to become more convenient and easy. Then, after the war, the new technologies made homemaking even easier than before. (Can you say, WASHING MACHINES?!)


The housewife of the 1950's had all kind of conveniences their mothers had never dreamed of! Electricity brought electric ovens, indoor washing machines, and refrigerators to the kitchen. And kitchens began to be more decorated and beautified. And the women became "more beautified", too!


With all of this ease and convenience, the standards for cleanliness grew to new levels. And television entering homes reinforced this idealized view of homemaking. Homes needed to be pristine in cleanliness. Furniture and decor became more expensive and fancy, so the appearance of housewives was expected to be neater and more refined, as well. Aprons were now less of a tool for women to keep their dresses clean, and more of a fashion statement.

Perhaps in response to the new high expectations women had placed upon themselves, the 1960's and 1970's became fertile ground for the so-called "feminist movement." Women of my generation (I'm a Gen-Xer in my 30's) were raised by mothers who were constantly being battered with the message that the work they were doing in their homes was "meaningless" and "stupid." I can't even imagine how difficult it was to raise daughters in such an environment! To work hard trying to give your family the best you could, and then at the end of the day, being told your efforts were worthless!

I honor my mother and my aunts for standing strong in the midst of those times of confusion! They recognized how important the work of motherhood was, and they passed that down to their daughters. I am so grateful for their good examples!!!

I could go on and on about how destructive the "feminist movement" has been to us in society today, but I'm trying to be positive, here. *wink*  Besides, I think we can see the fruit that movement has produced in our lives at this time in history, every day.


But I want to give you hope and encouragement! We, the mothers and women of today, CAN make changes for good! And when we look at the women of the not-to-distant past, we can find many of the  answers we need to improve our homes and families in the here-and-now! I can't wait to share some of these lessons in my next post-- Part Two of  "Old-Fashioned Home Management". 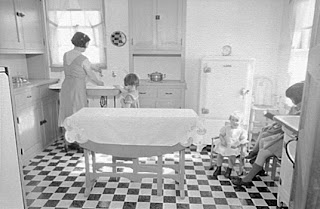