Standing Up for Traditional Marriage 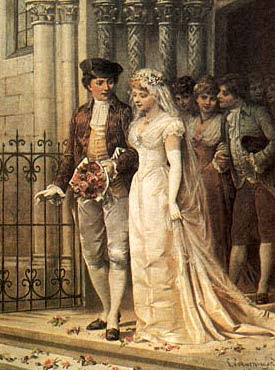 “God created man in his own image, in the image of God created he him; male and female created he them. And God blessed them, and God said unto them, Be fruitful, and multiply, and replenish the earth”
(Genesis 1:27–28).

“Therefore shall a man leave his father and his mother, and shall cleave unto his wife: and they shall be one flesh”
(Genesis 2:24)

This post has been brewing in my mind and heart for a couple of weeks now, and then Cocoa's post today urged me on to write my own post on the matter of marriage, as a way to add my voice to hers in defense of The Traditional Family. (Another great blog post supporting traditional marriage can be found here.)

Some of my readers may not have heard about the blow that was given to the people of the state of Utah mere days before Christmas of 2013. A lone judge in the state declared-- against the law passed by the people of Utah way back in 2002-- that "same sex marriage" was legal in Utah. In the midst of Christmas shopping, and the flurry of new winter snow, the law protecting marriage was brushed aside and declared void.

I was baffled and shocked that one man felt that he had more knowledge, more insight, and more influence than all the people of an entire state. And more than that, I was disappointed and saddened that this one judge felt that his judgement was more important than the eternal laws of the very Creator of the universe.

I wish to raise my voice with others to say that I KNOW that marriage is ordained of God. I declare firmly that children need, and are entitled to, a loving mother AND father. I testify that God's laws and morals are unchangeable and eternal.

Luckily, the Supreme Court has issued a stay on the matter, but the battle for traditional marriage in Utah is not over yet.

I am so grateful that our Church is led by men who are called of God, who are not afraid to stand and declare truth in the face of opposition. I'm also thankful that they expressed love and kindness to ALL, reminding us all to be civil and respectful to one another.

Ironically, this talk, and this talk were given to all the members of our church around the world in October of 2013-- just two months before this notorious judgement was brought down upon the people of Utah. (MANY of whom are members of my church.)

You can read the Church's official statement here.

To learn more about what our Church teaches about marriage and the family, see "The Family: A Proclamation to the World."

With love and conviction,

Posted by Rachel Keppner at 4:43 PM