A Great Article on Marriage 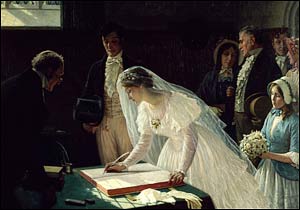 Dear Friends,
One of our readers, Amy H., sent me a wonderful article about protecting traditional marriage.
Three states will be voting on adding amendments to their state constitutions next week, and I hope all my readers in Arizona, California, and Florida will get out there and vote to keep marriage a sacred union between one man and one woman. Our vote does count, and we can make a difference in the world our children and grandchildren will face.
(It was written by an anonymous lady residing in California-- if anyone knows who we can credit for it, please e-mail me at libermama at gmail dot com. Thanks!)
The issue of same sex marriage is heating up, and the camp campaigning against has spilt ink decrying the practice as an “abomination” against decency. This is a shame. Homosexual couples are not an abomination. They are self centered.

It’s not that they are alone. The entire modern American culture has become consumed by self centeredness, convinced that any tradition, law or practice was created solely to fulfill the personal desires of the population. Translation: It’s all about me and gay couples are no different. They speak passionately about equality to marry, the need to proclaim their love in front of friends and family and present their arguments as a rebuttal to the past practice of forbidding mixed race couples from marrying. It’s all very rousing, but ends by missing the point of marriage. Equality has little to do with it - we do not allow children or blood relatives to marry. Proclaiming your love in front of an audience is touching, but marriage is not your personal fulfillment factory.
Marriage has a very narrow job-description, but in doing that job, it has a wide effect on societies that respect it. It answers the question “Who will take care of this child?” by 1) removing the man from circulation so he cannot get other women pregnant, 2) creating a safe space for a woman to give herself to a man and 3) ensuring that a woman will not go through her pregnancy and raise the child alone and poor. In short, it sanctifies the sexual act by forcing a man to pay for the offspring that might result from his sexual activity. The benefits - the child gets two parents to support and protect him or her, the man has his energies engaged in a worthwhile project, and women are cherished. You must admit this is better than the current craze of disposable sex, where women and their children get dumped into poverty because the man has moved on.
America’s unfortunate history of forbidding mixed-race couples from marrying fully supports the application of marriage as a protector of women and children. If anyone needs the legal and economic protections of marriage, it would be the woman marrying outside of her race. If society, her family, and her new in-laws frown on the relationship, she and her children will still be supported and protected by the bonds suggested by her marriage. Marriage is blind to color, social status or economic level. Its main job is to make certain the man is bound to protect and support his wife and children, and turns a deaf ear to any secondary arguments regarding the suitability of the match. It doesn’t give a hoot what the Country Club will say. If the couple is married, that is all that matters to the law. The wife and the children are blessed as legitimate, primary family members that deserve protection.
Obviously, homosexual couples do not have the same need of this protection. A household made up of two men will not suddenly find itself scrambling to provide for a new baby in nine months. Gay adoption is indeed an issue, but should we weaken the description of marriage in order to accommodate children that are largely available only because of the dissolution of their own families?
There is no magic tool that will perform every job. It is best to get the one tool that is specifically made to perform the exact job you are attempting to do. Marriage is just such a tool. It is designed to link sex to a protective environment that does not exploit women. Let’s keep it that way. It really is NOT all about you.
Posted by Rachel Keppner at 4:29 PM